Electric scooters and two-wheelers have gained popularity in Indian market in a very short span of time. There are many Indian manufacturers who are launching new products along with foreign companies. Lately, we have been hearing a lot of issues about electric two-wheelers but, all this is not stopping the manufacturers from experimenting with new models. Now we have an electric scooter with a very unique design. What makes this electric scooter unique is that it gets three wheels The other interesting factor about the scooter is that it can be tilted and unlike normal scooters it won’t fall.

The video has been uploaded by Desi Vlogs on their YouTube channel. In this video, vlogger talks to a dealership owner who had imported one of these three wheeler electric scooters. This is the only unit available in India and when the video was recorded, they were looking at marketing opportunities for the model. The dealership owner mentions that the scooter meets European standards.

The scooter is aimed at customers who plan to deliver or carry things from one point to other. The scooter has a very unique design to it. The dealership owner can be heard saying in the video that the scooter has a European design to it. The scooter is suitable for carrying cargo. The main attraction on this electric scooter are the two wheels at the rear. This offers additional support to the rider and also better stability. This is India’s first tilting electric scooter with three wheels. The technology used in this scooter is interesting and the suspension setup at the rear makes compatible for any type of roads. 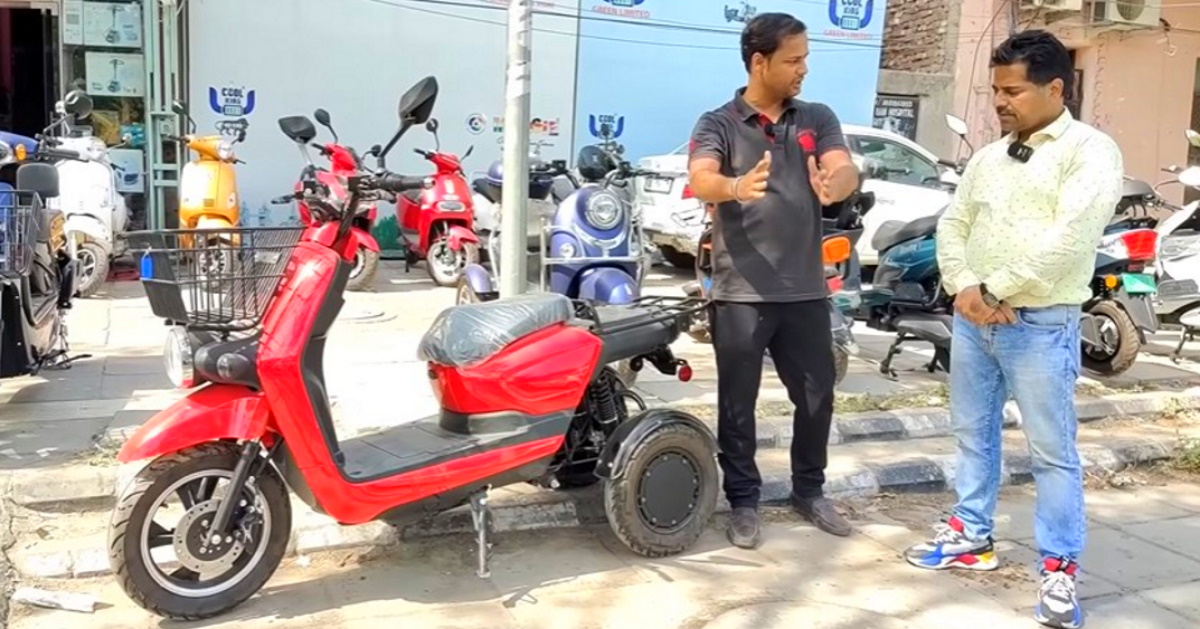 Both wheels at the rear have a 2000W electric motor each. This makes it ideal for carrying items. All three wheels have disc brakes and can be ridden at a speed above 70 kmph as well. The dealership owner can be heard saying in the video that there are two battery packs in the scooter and depending up on the load that the scooter is carrying, it can do anywhere between 150-200 km on a single charge.  Both wheels at the rear have different arms which help them move independently. There is suspension set up that would a smooth ride to the rider even when the scooter is being ridden on rough roads.

As this scooter is meant for carrying stuff, there is only one seat. behind that is a metal plate on which a top box can be mounted. The seat looks very wide and should offer decent amount of comfort to the ride. In front of the scooter is a basket which would again hold decent amount of things in it. The scooter gets a fully digital instrument cluster and a normal looking handle bar with buttons on it. Video also shows how the scooter can stay up on its own without falling down. Even on uneven surface, the scooter was standing straight. The electric scooter was brought to India to explore the market and the dealer can be heard saying in the video that the scooter might cost over 1 lakh. The video does not share any information about the brand.

10 Lines on Holi for Students and Children in English